As speculated by ourselves and most of the internet, Neill Blomkamp, director of the forthcoming Chappie has confirmed that the new Alien movie he will be making as his next movie is in fact a direct sequel to James Camerons 1986 Aliens, thus effectively disregarding latter movies Alien 3 and Alien Resurrection. Exact details of the movies full premise and plot are still unknown to anyone beyond Blomkamp's inner circle but from the concept art (including the little known gem pictured below) released by the director it would appear that after another prolonged period in Hypersleep Sigourney Weaver as Ellen Ripley and Michael Biehn as Corp. Dwayne Hicks awaken to ultimately discover that their 'beloved' employer; the company AKA Weyland-Yutani have since sectioned off the derelict Juggernaut alien craft on Acheron LV-426 and have finally gained uninterupted access to their much desired prize and the franchises main star; the Xenomorph. 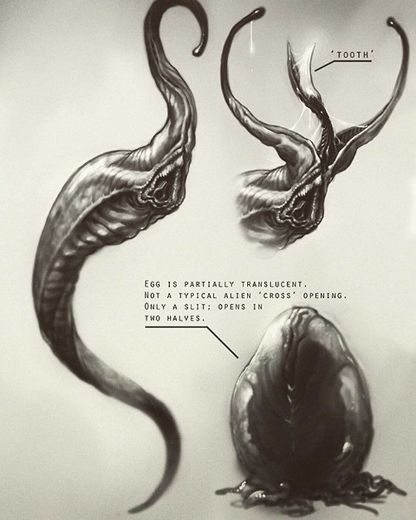 While Actress Sigourney Weaver has confirmed she will return as the franchises heroine, former co-star Michael Biehn has yet to announce his involvement. Coincidentally, director Blomkamp developed ideas for this movie while working on the ill fated Halo: Landfall for 20th Century Fox, during the time that producer Tom Rothman was head of the studio. Now it seems that Blomkamp has secured the deal to make this movie with Fox as Sony Pictures, whom produced the directors last two movies, Elysium and the forthcoming Chappie, has just employed Rothman as their new studio head.

3 Fan responses to Neill Blomkamp Confirms Alien 5 Will Be A Direct Sequel To Aliens!

Could this be the A2 Queens last egg, left on the Sulacco? Interesting....

So Alien 3 was just a bad cyrosleep nightmare...I can live with that.  The Company can monitor and implant dreams?  What about Newt? Prolonged cyrosleep...they still age a bit.....right?  I liked James Camerons take on the Aliens being like insects, yet even better with the hints which Prometheus produced.  The cocoon deleted scene in ALIEN still applies for me. Can't wait to see these cybernetic monstrosities.

This should have been how the 3rd one played out. Aliens was an epic masterpiece and they tried to go back to the first one and that was a big mistake. They had so many directions they could have taken and they chose the worst one. I for one am glad they are going back and cutting out alien 3 and alien resurrection. Aliens colonial Marines Was a step in the right direction let's hope they do it right and bring back the aliens and Ripley we all grew to love